Published by Mello e Persano, Genova 1977.At the beginning of the book (3 pages) there is a text by Winckelmann "Dell'arte del disegno de' Greci e della Bellezza".Then the six double pages (full pages) with the illustrations. All the illustrations are printed in lithograph and serigraph, but two of these are original (always different) large size (cm 50 x 70) original collages with attached pinted papers and a closed (mistery) envelope. Signed in the colophon in pencil by Paolini.

Milano, Galleria dell'Ariete, 1971. Card with loose tables. Published for the exhibition. The catalogue for the Ariete exhibition becomes, with very few textual interventions, an artist’s book. The work on display in the gallery consists of appliqués photographs of a work from 1960, Disegno geometrico, to which Pauline adds a signature which always corresponds to a different, imaginary author, and a title which is always different but which bears some relation to the name of the author (e.g. the name Ahmed Barak correspond to the title Mercato tunisino, which refers to a work by Kandisky, or Zorah, the name of the Moroccan girl painted by Matisse, is attributed to Kalahari is also the name of an African desert). The book, which is the consequence of all this complexity, takes on the rarefied form of a conceptual work. 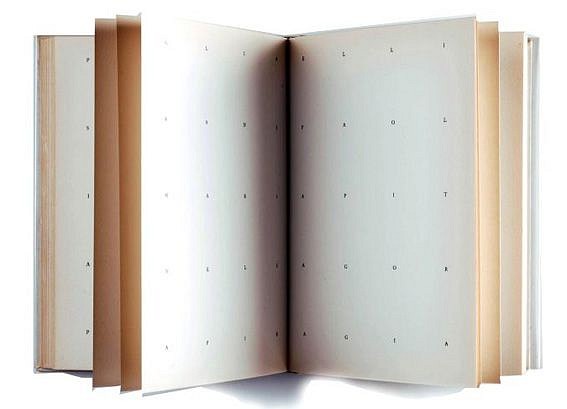 Giulio Paolini
Cio che non ha limiti e che per sua stessa natura non Ammette limitazioni di sorta, What doesn't have limits and what of his own nature does not allow limitation of any kind., 1968
4539-BK

The book is derived of a work, Titolo, which was made in 1968 of 2 large canvases placed side by side like two pages of an open book. "I placed all the letters from written names in my notebook." In the essay about Paolini's book, Celant talks about the concept of the name as a insignificant sign (..) a personal and subjective term, which doesn't have any universal or linguistic characteristics. It's just an abstract characterization that comes together with the person. (Offmedia, in G.Celant, Artmix. Flussi tra arte, architettura, cinema, design, moda, musica e televisione, Feltrinelli, Milano 2008, p.38). Edition of 50 copies, signed and dated. 128pp

Giulio Paolini | Cio che non ha limiti e che per sua stessa natura non Ammette limitazioni di sorta, What doesn't have limits and what of his own nature does not allow limitation of any kind. | 1968 | Zucker Art Books
Tip: You must first enter a valid email address in order to submit your inquiry